Imagine a smallest margin of victory of One-hundredth of a second? 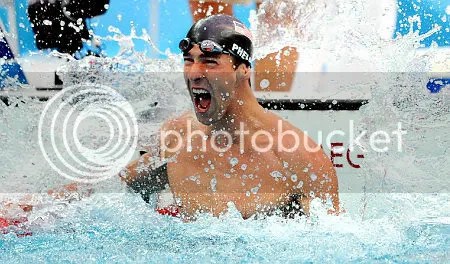 Michael Phelps did it and won his seventh gold medal in the men’s 100m butterfly. The 23-year-old came in at 50.58sec with Milorad Cavic second in 50.59. Serbian officials protested that Cavic should share the same gold with Phelps but were turned down as the video captured shows Cavic was gliding when Phelps was stroking.

Well before the match, Cavic had challenged Phelps. Cavic took his stand and faced the American as he took up his familiar pre-race stance alongside his block.

Let’s take a look at the photos: 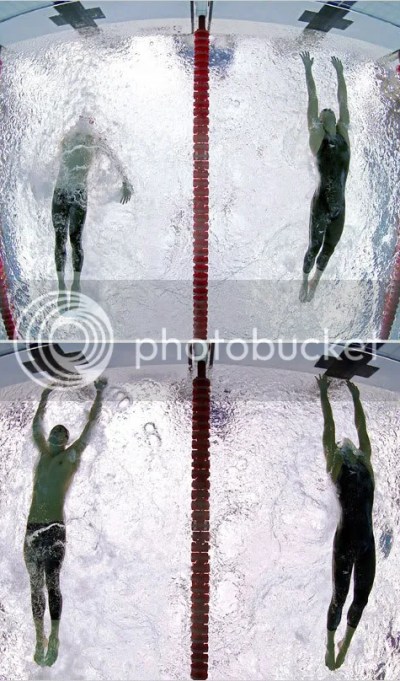 Photo credit: The New York Times
If you noticed, Cavic on the right was gliding (see from top picture to the bottom one).

This is extracted from Cavic’s blog, after this match and he explained it all:

I did it!!! I won an Olympic medal everybody! I’m sorry to brag, but I’m sure you all will forgive me just this one time! So, allow me to clear some things up:

1. The Media’s Manipulation and Misinterpretations: It never ceases to amaze me that garbage that reporters will come up with in order to make a story. Seriously. Anyone who knows me personally knows that I’m very respectful of others. I’ll admit that I’ve got bad blood with one person in the world, but that’s really it. I would never do anything to trash my competitors with seriousness, or to belittle them. If you were there to hear my media interviews, you’d know how much respect I’ve got for Michael Phelps. For a lot of reasons though, its easy to see why many reporters would pick up on anything negative and use it to support their imaginations. Am I a bad guy? No, not even close. I’ve got no criminal record, never got in trouble in school for anything (ever), and never got into a fight. Hate me for having some disagreements about some foreign policies, or for posting up some fast times, but I’m anything but a punk. I’m cool with all of my competitors that have even met me for a second. I like to think I’m easy going and easy to talk to… don’t imagine reasons to hate on me.

2. On winning a SILVER medal: I am completely happy, and still in complete disbelief that I was able to achieve this feat! I’m not joking… It’s a tough loss, but I’m on cloud nine. I congratulated Phelps and his coach Bob Bowman. I’m just glad the race was fun to watch for everyone. It was a pleasure for me, really.

3. Filing a Protest: Yes, as you all saw, I almost won the Gold, and if you ask me, the clock does not lie. I had nothing to do with this filing, and neither did my coach Mike Bottom. This is just another attack on my coach who has done never wronged anyone in swimming, except coach foreign athletes (non-Americans) to Olympic medals. You all have to understand that any coach would have done this for their swimmer if there were any possibility of error, but I’m sorry to disappoint, it was my Olympic committee and swimming staff who did the filing. We’re not “sour grapes” and we’re not “pissed”… If you ask me, it should be accepted and we should move on. I’ve accepted defeat, and there’s nothing wrong with losing to the greatest swimmer there has ever been.

4. So what now? People, this is the greatest moment of my life. I’ve finally achieved what I’ve worked so hard, and for so long to do. Let me enjoy this for a little while. I’m going back to Belgrade for a year after the Olympics. Its time to take a break and figure out the next thing to do!